Today we release our v2 platform which enables developers to create and re-use native modules provided by 3rd parties.

In the past if you wanted to add a native feature to your app that was not supported by existing Trigger.io Forge APIs, you would have to dive down into native code yourself or hire a contractor to do that. Trigger.io v2.0 is a big deal since developers can now make the native modules they’ve built on top of Trigger.io available for re-use.

Ultimately this means you’ll be able to select from a much broader range of native features – both the core APIs built by our team and others contributed by 3rd parties – and combine them with the best of HTML5.

You can see some examples on modules page right now:

We’ll be publishing several more in the coming weeks. If you have already built a Trigger.io plugin and would be interested in making it available to others as a module, please get in touch, we’d love to hear from you.

The journey and v1 product

We launched Trigger.io last year because of the huge shift to mobile and our desire to help web developers navigate that. Our core community of developers grew fast. They told us that they loved our platform because of the super fast build / test cycle, fast native bridge, and rich API which includes native UI components and integrations with cloud services which is much broader than alternatives.

All of that is enabled by our Toolkit UI, command-line tools and unique Forge build technology.

Later Reload made the proposition to web developers even more compelling: update your app at web speed without needing to go through the App Store approval process. On top of the ROI benefits to being able to reuse web code and skills when you first build your app, Reload makes a Trigger.io-style hybrid mobile app better for the long-haul when you update your apps and manage their lifecycle.

But what if you need a native mobile feature that the Trigger.io Forge APIs don’t support? We want you to have the best possible development process without compromising on your your app features, so we enabled extensibility through plugins. Now we’ve taken that extensibility to another level.

What Trigger.io v2.0 means for developers

Our v2.0 platform is a big step forward, but if you’re already familiar with our platform, you’ll see our commitment to speed in the build process, native wrapper, and the broad range of APIs remains the same – our module ecosystem is an addition, not a major change to what you’re already using.

But now, web developers who are building mobile apps with Trigger.io will be able to access to a broader range of APIs including cloud service integrations and native UI components sooner. Because you’ll be able to use 3rd party developed modules as well as those built by our team here at Trigger.io.

Instead of contracting for services whenever you want a new new feature for your native app, you’ll be able to pick-up and integrate re-usable components. 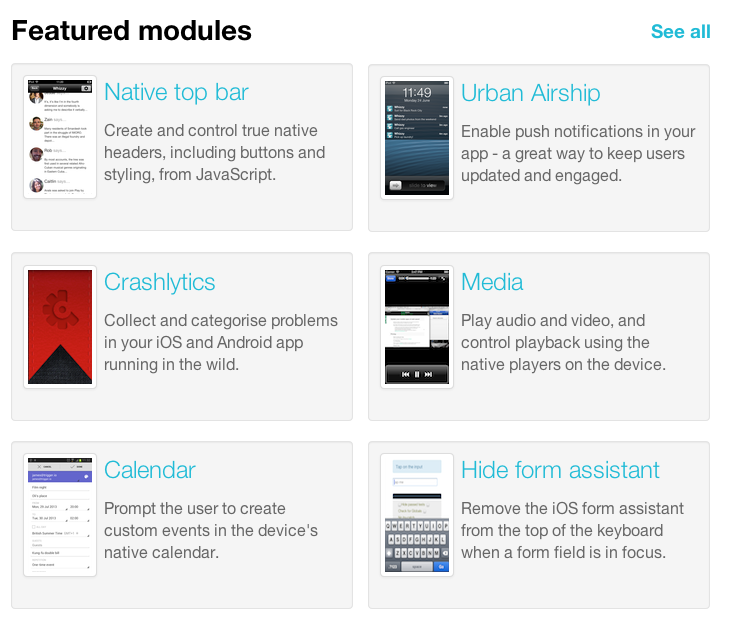 For developers who are able to build natively, you can make re-usable components available through our platform so you don’t need to repeat your work for each new client engagement. While you can’t charge for individual modules right now, you can use our platform to get more customers for your services and support contracts. And in the future we’ll enable a rev-share so you can earn a passive income from your work.

If you’re building, or thinking about build mobile apps, you’re concerned about which platforms you should be supporting, the upcoming iOS7 release and figuring out the set of features you’ll need – we’re there for you. Please get in touch at support@trigger.io so we can try to help.

Our plan is to continue to focus on improving our tooling and making the build / test cycle as simple as possible. While building a high quality module ecosystem that gives you the broad range of features that you can compose in new and interesting ways.

Mobile development should be a pleasure. Right now it isn’t. We’re further along the path and are determined to help web developers get there.